We just got back from our summer travels, and it’s been amazing. I haven’t been posting lately, because I was working on writing a post on school reflections, but I revised it so many times I forgot about publishing it… And that was all I was writing about. Anyways, why talk about school now, when I can talk about all our travels?

Over the last few weeks, we’ve been in many states, including Colorado, New Mexico, Texas, Louisiana, Mississippi, Tennessee, Kentucky, Ohio, West Virginia, (Regular) Virginia, Pennsylvania, Indiana, Illinois, Missouri, and Kansas. It’s been a rush, and we’ve packed so much into the time since we left Breck that I’m having trouble remembering everything that we’ve done.

After school ended (I passed all my final exams with almost straight 4’s, ending up with a cumulative GPA of 4.15, with a 4.14 from first semester, and a 4.16 from second semester), we stayed another week in Breck to pack up and get ready for our summer travels. In an unexpected move, we decided to go snowboarding for one last day (in JUNE!) on the hill, so we unpacked all our snowboarding gear (I had packed up and taken apart all our boards), and went out to Arapahoe Basin to snowboard. After a fun day of shredding in the spring slush (and a bit of rain), we headed home and repacked all of our snowboarding gear.

Not much happened between then and when we left, but we did go and visit our friends the Burdick’s (who we know from Team Summit) for a day after Isaac’s final lacrosse tournament. We had a ton of fun with our friend JR, and took his longboards out on the streets and bombed down the streets around his neighborhood.

Well, that was one of the last days before we took off, and when we took off, we were gone. We drove fifteen hours spread over two days on our way down to Austin, TX to see our friends, passing through New Mexico and spending a night in Amarillo. After getting to Austin, we met up with some of our friends at Dick Nichols Park, and then I proceeded to go and hang out with my friend Sage for the rest of the night.

The next day, we went to a trampoline park with all of our friends from Austin, and basically jumped around for a while, before going out to eat with all of them and returning to our old neighborhood for a few minutes before our departure to Dallas.

We stayed at our grandparent’s house in Dallas for a few days, seeing our cousins again for the first time in a while, and, on our last day in Dallas, went to watch Cars 3 on opening night.

One of my favorite parts of our trip was our stay with our best friends the Halls in Flint, TX, and I had a ton of fun with my friend Noah, building a wooden pinball machine and jumping into their pond at midnight. We stayed for two nights, then left to see our other grandparents in Louisiana. 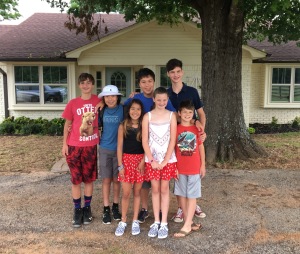 After we left Louisiana, our trip really began. We decided to change our Florida plans and go to Nashville, TN instead to see our relatives and surprise our cousin Oz for his birthday. It was great being back in Nashville again, and it was awesome to see our cousins after not having seen them for a while. We traveled through Kentucky to Virginia after that, and stayed with a lot of our parent’s college friends, who were all hospitable and fun to be around. Isaac even did a Nike Lacrosse camp in Roanoke, VA!

We made a decision to stay in Washington, DC for a while, and it is definitely one of my favorite cities. All the museums, works of art, and government buildings are so close together, it’s easy to just walk, run, or bike around anywhere! We saw some amazing places and things around the city, such as the Declaration of Independence, the Lincoln Memorial, and even got to watch the 4th of July fireworks over the Washington Monument. On the 4th of July, we rented bikes and rode down the streets of DC (the streets being closed for Independence Day), and then watched the fireworks from the Mall.

After DC, we headed to Chicago, IL, but not before passing through Pennsylvania, Ohio and Indiana. We saw a couple of friends in Pittsburgh, and played chess in a city square. Once we got to Chicago, we only stayed two days, but in that time, we walked alongside the river, biked around the city, visited the huge LEGO and Nike stores, and did the typical tourist thing, going to see Cloud Gate/The Bean.

After our short time in Chicago, we left to Champaign, IL for a Nike Tennis Camp. The camp was a week long, and we got in a lot of match play against many different players. It was a fun diversion from our trip, and awesome to just play tennis all day. When we left Champaign after the tennis camp, I realized that our trip was coming to an end. We passed through Kansas City, MO, and Mom and Dad went to see Steve Martin do a comedy show.

And now we’re back in Summit County, where we’re enjoying a month of fun before school starts. I’ve been running every day to prep for Cross Country season, so hopefully I’ll be ready by the time that starts. I’ve been procrastinating publishing this blog post for so long (exactly one month to the day), but it’s finally done! So, thanks for reading!

I am a young entrepreneur that snowboards, runs, backpacks, hikes, and plays tennis. I've traveled around the US with my family, and had some amazing experiences. I grew up in Austin, Texas and Breckenridge, CO, where I graduated high school in 2020. I started my own business in 2020, Gabe Media, and help clients with Google Ads, YouTube marketing, and video editing. View more posts