The last two weeks were a flurry of competitions, school, homework, fun, disappointment, and a little bit of sleep. I had my first boardercross Rev Tour one week ago on Friday, and it went pretty okay. I went out to Ski Cooper Friday morning, and raced hard. The top 32 out of the 38 competitors were seeded into brackets, and I ran a pretty bad time trial, and ended up barely making the cut, qualifying 30th. I got eliminated in my first heat, which I was extremely downcast about, but it was fine for my first Rev Tour ever.

After Rev Tour, all that remained was USASA Nationals. I had both boardercross and slopestyle practice on Saturday, my slopestyle comp on Sunday, and boardercross on Monday. Saturday went pretty well with practice. I landed a couple tricks on the large line at Copper and got my start down on the boardercross course – I was all set to compete.

Sunday went pretty okay, around what I expected, although I think I could’ve gotten a few places higher. I didn’t land my first run, because I sent the second jump too big and overrotated my frontside 360 to a 540, almost landing but ultimately going down.

On my second run, I once again stomped the first jump, which I sent a backflip off of (although I did send the second one quite a bit bigger than the first time), and kinda-barely landed my 360 on the next jump, but hit the knuckle of the jump and lost all my speed. I proceeded to hit the last jump, but landed on the deck. I guess I can count my second run as landed, but it still only scored me a 24.5. 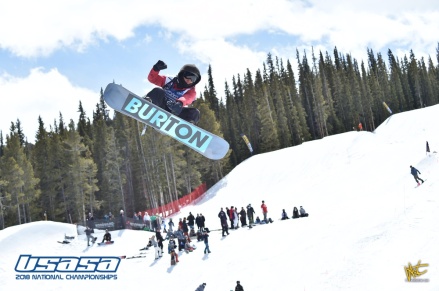 Anyways, slopestyle wasn’t my main focus to begin with, so I wasn’t that mad that I didn’t completely get my run. I was ready for boardercross the next day, but unfortunately it didn’t turn out the way I wanted it to. I placed 15th in time trials, meaning I got the second gate choice in my heat. My heat started out great, I was out in second place, in a good spot to qualify, edging out the two people behind me around the first and second turns. Around the third turn, I unfortunately got caught up in the slush and slid out. That kinda ruined my day, so yeah. How unfortunate. Only 340 more days until I get to try again!

Overall, this season went pretty well as a whole. I got a few new tricks, and began spinning the large line at Copper, which I thought wouldn’t happen till next season. Early season, I worked on my rails and actually didn’t do terribly at the New Years Eve Rail Jam at Copper, taking 8th/17. I placed third at my first slopestyle of the year at Copper, then won the next two at Keystone and Breck (although I don’t really count Breck as much because there wasn’t really much competition). Boardercross started out pretty terrible, but ended up ok. I lost my first two races, then took second at Copper on day 3. I had a ton of amazing races against some really talented racers, and that definitely helped in my progression. I even got to race Banked Slalom at Steamboat, which was one of my favorite weekends of the season. I’ll definitely be ready for next season, where I plan on competing in Rev Tour and the Hole Shot NorAm Tour. But for now, it’s track season, and time to run.

I am a young entrepreneur that snowboards, runs, backpacks, hikes, and plays tennis. I've traveled around the US with my family, and had some amazing experiences. I grew up in Austin, Texas and Breckenridge, CO, where I graduated high school in 2020. I started my own business in 2020, Gabe Media, and help clients with Google Ads, YouTube marketing, and video editing. View more posts